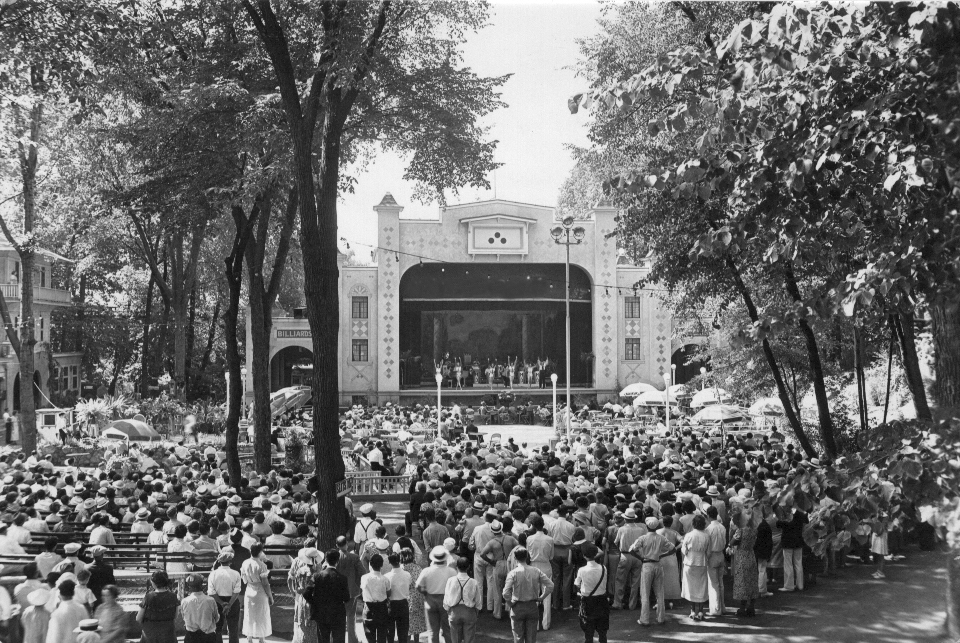 Press the top right icon (from $5.00) below for options

Why Make This Film?

The House of David story has fascinated the minds of millions for over a century!  It was a place in Michigan that was surrounded by mystery, religion, romance, baseball, travel, sex (or lack thereof), scandal, and huge wealth.

It was all based on an unusual religious colony that called themselves the “House of David”. Their leader and founder Benjamin Purnell preached that he was teaching the way to have “eternal life of the body” and the way to live forever on earth.  Converts traveled from afar to hear the message and many would join their colony, giving up all of their worldly possessions in exchange for the promise of everlasting life.  They came from all corners of the globe to see what they were being told was “Paradise on Earth”.

Those that joined spoke of feeling like they were at the gates of Heaven, as they arrived to trumpets and bands playing, everyone in beautiful attire, beautiful horse & carriages, and magnificent elaborate mansions to call “Home”.  They flocked in by the thousands, and many would make their lives there forever.

This film explores the past, present and the efforts to preserve the legacy of the House of David.

In the 30+ years, Chris Siriano, executive producer Life Everlasting has compiled the largest House of David collection in the world and has decided to share his knowledge with others of the same interest. He hired Rob Byrd and Moondog Productions who he considers the BEST documentary film producer and director around. They started this project and partnership in early 2021 with the intention to bring you this world class documentary film.  Chris and Rob hope you will enjoy it as much as they enjoyed making it come to life!

Today, Chris Siriano still operates the House of David Museum with the help of his amazing girlfriend Elizabeth Holowasko who has been extensively trained in the history of the House of David. Chris and Rob have plans to create 9 more documentary film segments about this amazing, fascinating and mysterious story!

More of the House of David Story

What began in early 1903 as a place of a new exciting Christian faith soon became so much more! The new converts had to learn a life of celibacy, of being vegetarians, living a communal life, that men could never again shave or cut their hair, and of learning the teachings of their newly found leader Benjamin Purnell, who had traveled as an itinerant preacher from Kentucky, and who arrived into Benton Harbor in a covered wagon and who was a broom maker by trade. The success of his dream of creating his own religion would go down in history as being one of the most famous American founded faiths of all times.  Soon after their beginning there on the eastern edge of Benton Harbor, the construction began of several majestic mansions, elaborately detailed like never before seen in the Midwest, and places that all of these travelers could quickly fall in love with and move immediately into as their final life’s destination.  As they arrived they were intensely interviewed to find out every possible aspect of their lives, and if chosen by the pillars, were asked then to sign over every worldly possession that they had held to be donated to the House of David to support their great cause.  There were farmers with mammoth amounts of farmland, there were industrialists with factories and foundries, there were a husband and wife that had a diamond mine in Australia, two brothers that owned the 2nd leading wagon factory in America behind Studebaker and had invented the very first automobile, stringed instrument makers from England, artists from Italy, famous actors & actresses, some of the worlds greatest musicians,  great chefs, jewelry makers, great masons, famous architects, watch makers, great inventors and great minds from around the world,  and on and on.  Immediately all of these possessions were to become the property of the House of David.  Within a short few years the colony had amassed a fortune, literally holdings into the millions, and that growth continued on for the next 3 decades.

Beginning with their invention of the waffle cone in 1904 they traveled to the St. Louis World’s Fair to introduce themselves to the world and to kick off their new invention that would capture the hearts of millions.  It was at that event that the founder Benjamin Purnell discovered the amazing use of little 1/4 scale steam engine trains that were being used to transport the tens of thousands of visitors to the World’s Fair into the grounds.  Immediately after the fair ended the House of David would send two of their men to travel to New York to the Cagney Brothers Locomotive factory where they acquired one of the little steam engine trains from the World’s Fair and transported it back to Benton Harbor, where the colony’s men dismantled every piece of it and recreated that very train to be stronger and faster, and then built 8 more just like it!  At that point in 1905 Benjamin Purnell decided to begin construction an amusement park, using the newly built trains to circle the perimeter of the park and transport visitors into the center where they had their zoo, a spectacular amphitheater for musical events, an exotic bird aviary, a hotel and vegetarian restaurant, and eventually a baseball stadium for its long haired whiskered players that would become world famous!!  They built their own steam fired power plants that generated their own electricity, which they sold off to the City of Benton Harbor until WWll.  By 1908 the newly built park was in full swing, and visitors flocked in from all over the country!   The colony bought cruise ships, a bus line, trolley cars, and every form of transportation that they could get their hands on to bring guests to their soon-to-be famous park!   Visitors arrived by the tens of thousands per week, and soon the House of David was one of the leading amusement parks in all the country.   It would ultimately entertain nearly 100 million visitors before its demise in 1973, when the average age of the membership had gotten to be over 70.

Around 1909 Benjamin Purnell decided to buy a 2600 acre island in the middle of Lake Michigan, and for the next 11 years they would use this little paradise called “High Island” as an amazing source for exotic timbers to sell to the Grand Rapids furniture industry, as well as bring the timbers back to St. Joe and Benton Harbor where the wood was used to construct those cities most elaborate homes.  The colony used their own tall sailing ship, the Rosa Belle, to deliver items to the members living on the island, as well as deliver back all of the great crops that they grew on High Island.  The Rosa Belle was lost at sea during an early November storm in 1917 and all hands on deck were lost with her.   One of the colony’s steam ships, the Rising Sun, then took over and continued to transport passengers and timbers for the next several years from High Island to the cruise ship port in Benton Harbor, until she too was lost at sea in 1921.  The ship remains on her side near Pyramid Point just south of Charlevoix.  Soon after that accident the House of David abandoned the island and eventually sold it off to Warren Townsend, who owned an enormous furniture factory in Grand Rapids.

Chris Siriano grew up in the little country town of Riverside Michigan, a small farming community about 2 miles Lake Michigan. His father Tony Siriano had a deep passion for history and loved to share the things he learned about in their deeply rooted Italian family and about world history.  It was during these early years that Chris also felt a passion for history and went on to major in history and political science at Western Michigan University.  After graduating with a Bachelor Degree he came back to S.W. Michigan and began studying about local history.  Nearly everything Siriano uncovered had some toe to the House of David.  Either being invented by, built by, owned by, or somehow affected by the House of David…..Siriano made the decision that this famous chapter in local history needed to be saved and shared.  It was after several years of intense research and amassing quite a large collection of rare items, Siriano decided it was time to start a museum and thus in the spring of 1997 he founded the House of David Museum and has never looked back!  The museum nearly immediately acquired national attention after Siriano held the very first House of David Baseball Team Reunion with 14 of the old original players from their famous whiskered teams!  Every media thru the Midwest showed up to film and interview the old players, all of which passed away only a short few years later.  The House of David Museum grew and grew in popularity and size, hitting over 100,000 visitors and over 80,000 artifacts several years ago.  ESPN rated the House of David Museum the #3 Baseball Museum on the North American Continent back around 2010 and a book was written about that called “The 100 Best Baseball Places to See before Striking Out”.

Siriano’s museum would go on to be written about in nearly every major media across the country, including many tv stations and radio broadcasts.  He was interviewed in 2018 by Sports Illustrated for a fascinating Podcast created!   Siriano has helped create an animated film about the House of David by a nationally famous cartoon artist, made a documentary film back in 2010 and authored two books about the House of David story.

He spent over 25 years around the House of David colony members learning every tiny aspect of their lives and story, and has documented those years thru thousands of pages of notes, tens of thousands of original photos, filmed interviews, and a mountain of research and travel.

Chris has one child, a daughter Ali Siriano who now has two children of her own.

Rob graduated from Ferris State University with a bachelors of Arts degree in Television Production and an Associates of Science in Audio/Visual Production. Rob was also a three year starting pitching at Ferris State University where he helped the team to win four straight conference titles as a left handed pitcher. He was also named to the GLIAC All-conference team his Junior and Senior Year.

In his time as a Producer/Director at WGVU-TV in Grand Rapids, Rob was awarded an Emmy Award for Hope College Christmas Vesper, with a second nomination for Time and Chance: Gerald R. Ford’s Appointment with History. In all, Rob was awarded over 40 National and State of Michigan awards for Television Broadcast Excellence including multiple Michigan Association of Broadcasters awards.

A Father of two grown children, all his efforts these days go towards making the radio show, world class video production, making and recording music. Find music at TrusinByrdBand.com.

Rob started a radio show in 2019 which is now known as Rob Byrd’s Moondog Show and aires on Superhits 103.7 Cosy FM every Saturday morning from 6:30-8:30am. He is also host of a couple different podcasts.